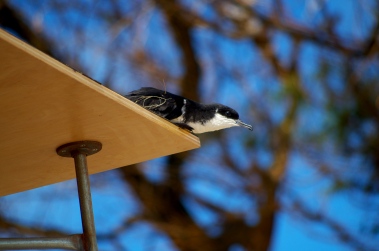 Every year, young shearwaters are attracted to artificial lights on the island of Kaua‘i, where they are rescued by concerned members of the public and passed over to the Save Our Shearwaters project.  There the birds are examined by trained staff, rehabilitated as necessary and then released to continue their journey out to sea.

Mike McFarlin, a KESRP staff member who helped organize the event, explained. “We do this once a year with the Save Our Shearwaters project – giving local school children the opportunity to take part in the release of these endangered seabirds.  Each bird is also offered a pule (Hawaiian prayer) by Kupuna Sabra Kauka just before it is released, which makes the event even more special and serves to highlight the importance of this species in Hawaiian culture.”

The ‘A‘o is one of two threatened seabirds found only on the Hawaiian Islands.  Kaua‘i holds an estimated 90% of the World population of this species, making it a vital refuge for the species.  The ‘A‘o breed mainly in remote and mountainous parts of the island, and populations have declined dramatically in recent years.  The decline is due to a number of issues, which include predation by introduced predators (such as feral cats, rats and pigs), collisions with man-made structures and fall-out of fledglings due to artificial lights.

Newly fledged birds are very vulnerable to lights and as they leave their burrows in the mountains for the first time and head out to sea.  On dark or stormy nights in particular they often become attracted to bright lights, which they circle until exhausted.  This often leads to them landing on the ground, where they are eaten by cats and dogs or run over by cars if they are not rescued.

Tracy Anderson, Coordinator for the Save Our Shearwaters project said, “This is always a busy time of year for us.  In recent years, we typically receive a hundred or more of these endangered seabirds, which – while a lot – is a far cry from the thousands received by the project twenty years ago.  This just goes to show how badly this species is doing, and highlights the importance of on-going conservation efforts to save the species.”

Members of the public can help at this time of year by keeping an eye out for fallen birds.  If birds are found, they should be carefully collected and placed in one of the aid stations located at Kaua‘i County fire stations and other locations around the island, where they can be collected by the Save Our Shearwaters project staff.  The fall-out season starts at the end of September and ends in mid-December.

KESRP is a State of Hawaii Department of Land and Natural Resources, Division of Forestry and Wildlife project, administered by the Pacific Co-operative Studies Unit of the University of Hawaii.  SOS is a DLNR project housed at the Kaua‘i Humane Society and financially supported by the Kaua‘i Island Utility Cooperative.

Anybody finding a downed ‘A‘o should take the bird to the nearest SOS aid station (found at all fire stations around the island) and leave detailed information on where and when it was found. You can call the SOS hotline at 808-635-5117 for more information or to let SOS know that you have dropped off a bird.  SOS aid stations are checked every morning for seabirds, which are then taken to SOS headquarters in the Kaua‘i Humane Society for rehabilitation and release.