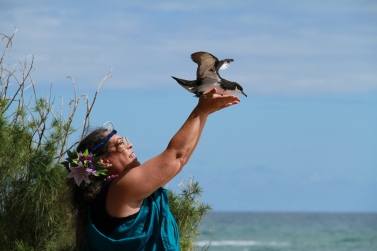 LIHU‘E – October 24th 2013 – Local school children from Wilcox Elementary School released 5 fledgling ‘A‘o (Newell’s Shearwaters) out to sea today as part of the annual E Ho‘opomaika‘i ‘ia na Manu ‘A‘o (A Cultural Release of the Native Newell’s Shearwater) event.  The birds, which had been rehabilitated by the Save Our Shearwaters Program, were offered a pule by Kupuna Leilani Kaleiohi prior to release in front of the excited children.

The event is held every year by the Kaua‘i Endangered Seabird Recovery Project (KESRP) and Save Our Shearwaters (SOS) to increase awareness about Kaua‘i’s ‘A‘o.  The ‘A‘o is an endangered seabird found only on the Hawaiian Islands.  Kaua‘i is the last main refuge of the species with an estimated 90% of the World population found on the island.  Unfortunately this montane-nesting shearwater has experienced dramatic declines in recent years.

While the birds face significant threats in their breeding grounds from introduced predators (such as feral cats, rats and pigs), invasive plants and powerline collisions, young birds leaving their nest for the first time are particularly vulnerable to light attraction as they make their way towards the sea.  As they near the coast after leaving their burrows in the interior of Kaua‘i many are attracted to bright lights which they then circle until they become exhausted and eventually crash to the ground (a phenomena termed “fall-out”).  Once on the ground they are extremely unlikely to survive – they get run over by cars or eaten by dogs and cats – unless they are rescued and handed over to the Save Our Shearwaters program.

“This event gives local school children the chance to see and appreciate these unique birds,” said Brooke McFarland, KESRP Avian Conservation Research Associate, who organised the event. “By talking to children about the conservation issues surrounding this species, and highlighting the fact that Kaua‘i is the last main refuge in the World for the ‘A‘o, we can inspire the next generation into helping protect the species.”

Before the actual release event, which was held at Lydgate Park, staff from the Kaua‘i Seabird Recovery Project went to the two schools involved in this event – Wilcox Elementary and Island School – and gave the children a presentation about the conservation of Kaua’i’s endangered seabirds.

Brody Soong (age 9) of Wilcox Elementary elaborated that these birds are “important to fishermen because when they see that bird flying over the water they know that there are probably fish underneath it.”

A second release event will be held on 28th October with fourth-grade students from Island School, who will be accompanied by their teacher Natasha Arruda and Kupuna Sabra Kauka.

Kaua‘i Endangered Seabird Recovery Project is a State of Hawaii Department of Forestry and Wildlife project, administered by the Pacific Co-operative Studies Unit of the University of Hawaii.  The Save Our Shearwaters Program is housed at the Kaua‘i Humane Society and supported by the Kaua‘i Island Utility Cooperative, while transport to and from the event was funded by the Kilauea Point Natural History Association.

Additional information : Anybody finding a downed ‘A‘o should take the bird to the nearest aid station (found at all fire stations around the island) and leave detailed information on where and when it was found. You can call the SOS hotline at 808-635-5117 for more information or to let SOS know that you have dropped off a bird.  SOS Aid stations are checked every morning for seabirds, which are then taken to SOS headquarters in the Kaua‘i Humane Society for rehabilitation and release.